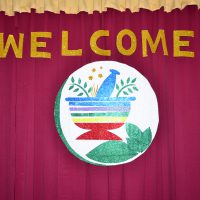 Welcome to Unit of Siddha Medicine

The system of Siddha Medicine is the most ancient medical systems of India and has a long history and traditionally practiced as an indigenous medicine in the south India and Sri Lanka, especially, in the Northern and Eastern provinces. The Siddha Medicine system plays a prominent role in traditional health care system in the Northern and Eastern parts of Sri Lanka, especially in the private sector; Siddha Medicine still receives significant public support as a complimentary and alternative medicine.

Celebration of the International Yoga Day

The Unit of Siddha Medicine, Trincomalee Campus organized a “Yoga Week 2018” under the theme, ‘Revitalize the body and mind by Yoga’...

Faculty of Health Care Sciences, Eastern University Sri Lanka has planned to organize an awareness programme regarding the management...

Good nutrition is an important part of leading a healthy lifestyle. Combined with physical activity, diet can help to reach and maintain ...